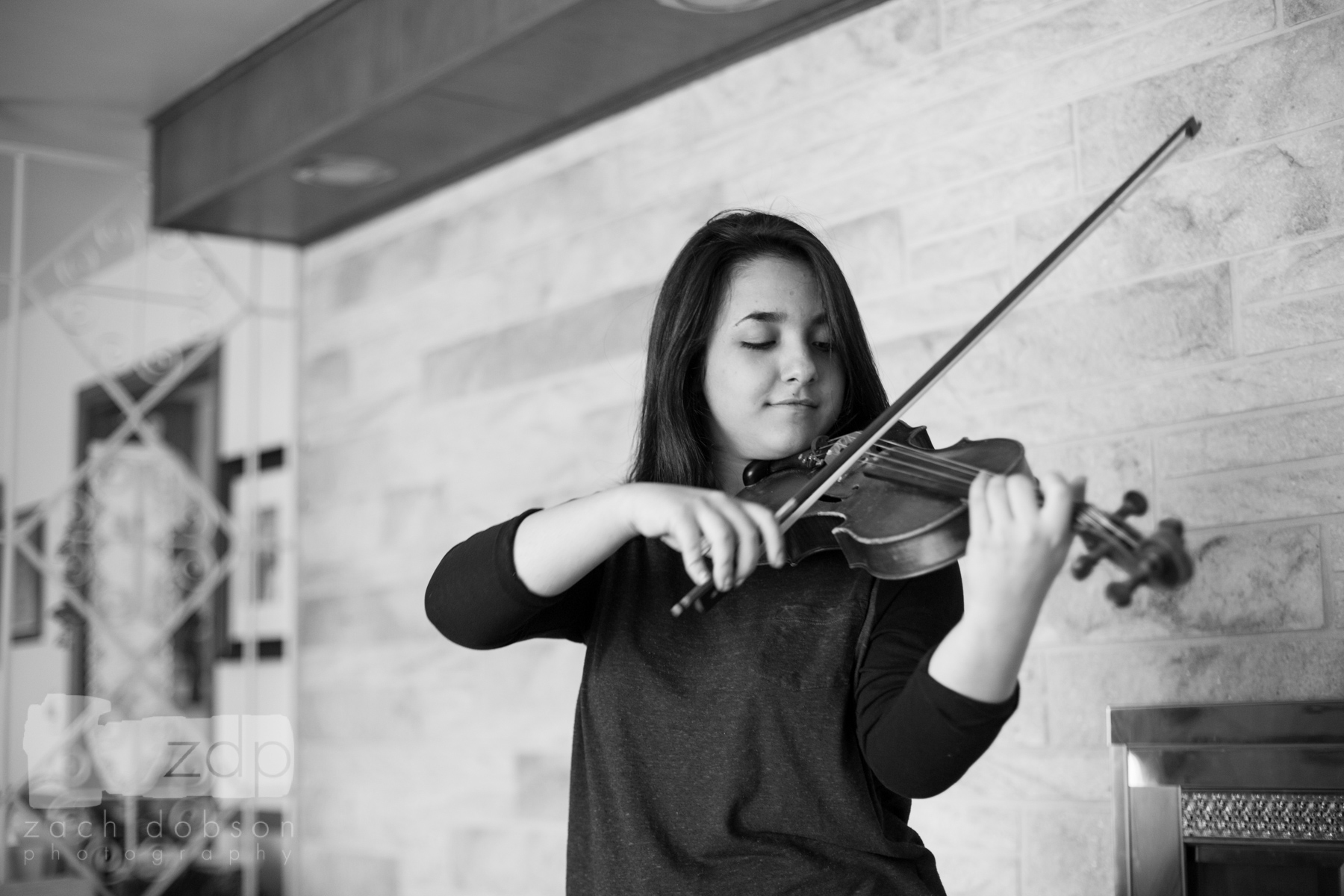 Sareh lived her first 13 years in Iran.  She began to play violin at age 10, but her family had to keep it a secret, as “western” music is strongly discouraged.  Later that year, she and her sister were attacked by police when they saw her carrying her violin, which left Sareh with a permanent injury to her leg.  When confronting the police for attacking his daughters, her father was arrested and jailed for a month. From then on the family was harassed by the police on a regular basis, so they left their town to seek a safer place to live.

A neighbor in their new town had a son who teaches at Indiana University.  Through him, a video of Sareh playing violin was shown to a professor of music.  Sareh was then invited to participate in the IU Summer String Academy in 2014.  She received a visa to travel here as a student, and was accompanied by her father.  Her mother and sister are currently in Turkey as they await word on whether they will receive asylum in the United States.

Sareh’s story of bravery and perseverance is a great reminder of how lucky I am to live in a society where I can follow my path without fear of persecution.  Sareh overcoming such adversity proves to me that nothing can keep me from my Personal Legend if I am persistent and stay on course.

The following set of six questions will be answered by each of the subjects.

I believe my calling is to be a violinist. I see myself on a stage, playing for people’s enjoyment. I also picture myself writing music and conducting an orchestra.

I was 10 years old when I first heard violin music on a TV, through a satellite dish. I wanted to learn to play the violin! My dad got me a small violin, and I started playing the violin and had a few lessons, but then the police in Iran smashed my violin and badly injured my leg. For two years, I was unable to play. Then my dad purchased another violin and I started again. Two years ago, I was invited to participate in the IU Summer String Academy in Bloomington, Indiana. Coming to the US was a wonderful chance for me to pursue my calling in a way I could not have done in Iran! I am grateful to God and to the people I have met in Bloomington for giving me this opportunity.

I don’t think that I am often “in the zone,” but I enjoy mastering and memorizing pieces of violin music. I like to interpret the composition so that it conveys what I am feeling when I play it. When I am performing, I thoroughly enjoy the interaction as I share my understanding of the musical piece with those who are listening. I love to play and share music with others.

Growing up in Iran made it almost impossible to pursue my dream of being a musician. In Iran people, particularly girls, are not allowed to play “western music.” A policeman shouted at me that I should be studying the Koran, not playing a violin, before smashing my violin! I learned to play the violin secretly, by listening to violin music that I heard in our home via a satellite dish that was hidden from the police when not in use.

I have learned the joy of playing the violin and giving people enjoyment. Music is as important to me as breathing! It is not just a hobby.

When you have an opportunity that “knocks on your door,” make sure you take advantage of it, and go with it to the best of your ability. Follow your calling, whatever it is!